Alexandria, Commit to a 70 percent tax rate. It's Voluntary!

Dan Bongino goes bonkers over a slew of ignorant comments sloshed around by an ignorant socialist progressive who won as a New York Democrat. Alexandria Ocasio-Cortez is sparkly-eyed but dumb as a doorknob.

Ocasio-Cortez has a very charismatic character and has gained prominence among pariahs like Pelosi, Schumer, and other lackluster loud-mouthed Democrats.

Dan Bongino: Hey, Rep. Ocasio-Cortez, show us how it's done and donate 70 percent of your income to the government

After watching Ingraham, listen to one Bongino's best presentations by Dan Bongino, Episode 895, "Liberals will not leave us alone." He covers additional topics that will turn us into loyal listeners to his show.

Watch Dan Bongino take another shot at dissecting Alexandria Ocasio-Cortez: Dan Bongino: Hey, Rep. Ocasio-Cortez, show us how it's done and donate 70 percent of your income to the government

About the Author: The Dan Bongino Show 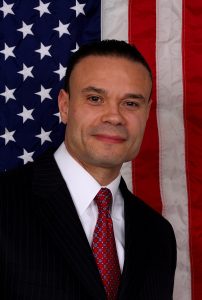 Daniel John Bongino (born December 4, 1974) is an American conservative commentator, radio show host, author, politician, and former Secret Service agent. In 2013, Bongino published a book critical of the Barack Obama administration where Bongino claimed to have had access to high-level discussions in the Obama administration as part of the Secret Service. Bongino faced bipartisan criticism for parlaying his role in the Secret Service into a political career. Bongino is known for his staunchly pro-Donald Trump commentary and for his criticism of Robert Mueller's probe into Russian interference in the 2016 election. Source: Wikipedia.