The Next Trumpster Generation

The Trumpster Generation Rules for the next 20 years. Unfortunately, 52% of the millennial and younger generations wish to work in a socialist or communist state. Unknowingly, they desire to live in a political system that comes with a horrifying history of despots that tortured and executive people in the millions.

Read More: They Hate Donald Trump – They Hate You Too

This is America. We survived the catastrophic Obama years. Let's investigate our American culture. For example, Milo exemplifies an interesting phenomenon about our young generations. Surprisingly, he is articulate. Effortlessly, he confronts and challenges his peers such as feminist groups. There are other brilliant youthful thinkers like Candice Owens, Ben Shapiro, and Tomi Lahren.

Buy the Book here: The Art of Winning, by Sebastian Gorka.

As conservatives, we are the cool adults dancing around like classic country or classic rock and roll kids. What crazy twist of fate! The older generations have found commonalities with a growing segment of young people in the urban and rural regions of the country, regardless of race, sex, and education.

American counter-culture is now conservative. We own it.

Seriously, giving money away or showing up for a rally is not good enough. Trumpsters have to get smarter. We have to move into the environment of the counter-culture, the twenty-somethings, or the percentages will transform America into a socialist or communist state. We should map out and invest our precious time on this planet for all generations.

Mr. Sebastian Gorka is not a victim.
He is a former Breitbart writer.
A European hell-raiser. Constantly in trouble and always called names like Neo-Nazi. He associates with the wrong crowds and he thrives in it. MILO, ‘Dr Christine’ (MILO) Makes A Rare Public Appearance!

The average American high-school student does not take a civics class. They don't read about history or visit historical places, monuments or famous places like Williamsburg, VIRGINIA.

Children learn by touching, seeing, cooking, etc. this is what saved my children and grandchildren. They walked through cemeteries, dressed up, ate the foods AND cooked with old cookbooks.

We did not take vacations in other countries. Our family and relatives stayed put here in the U.S. of A.

There was no money wasted at theme parks. We amused ourselves by pitching tents and camping comfortably in our national parks. It was delicious catfish or smoked trout. Yeah, it's not as glamorous as going to Disney World, but given all the things that we know about Disney, it's probably not such a bad thing.

Besides, unlike staring at the same boring melodrama every night on television, we found more exciting things to do. It's like playing a game huddled around a table or singing silly songs around a campfire. At first, we looked stupid, but you try it. Give it a couple of minutes and sparks joyfully fly!

Share memorable experiences. Put the electronics away, enjoy the nightlife at home or in the wilderness!

Read More: American Nations: A History of the Eleven Rival Regional Cultures of North America, by Colin Woodard, a review.

About the Author: Sebastian Lukács Gorka 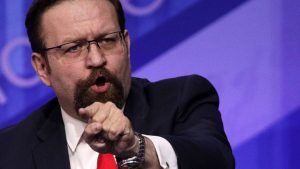 Sebastian Lukács Gorka is a British-born Hungarian-American military and intelligence analyst, who was a deputy assistant to US President Donald Trump in 2017. He served from January 2017 until August 25, 2017. He is currently a Fox News contributor. During his time in the Trump administration, Gorka gave a series of combative interviews with the press in which he defended the administration's positions on national security and foreign policy. Source: Wikipedia.